Yesterday Shenaz and I were invited to UCB India to talk to their employees about epilepsy. I spoke on ‘Understanding the challenges faced by people with epilepsy and caregivers’ and Shenaz spoke about her life with epilepsy. We were very happy to have an extremely attentive audience who also had a lot of questions to ask us.

Today, National Epilepsy Day, Kokilaben Dhirubhai Ambani Hospital along with Samman Association had a patient’s awareness program ‘Success Despite Seizures’. We were all happy to see the auditorium full of people with epilepsy and caregivers who were interested in hearing and learning more about the disorder. More importantly they were interested in joining Samman. 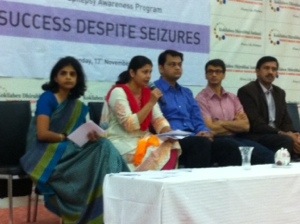